Are You Willing To Let Your Life Improve? 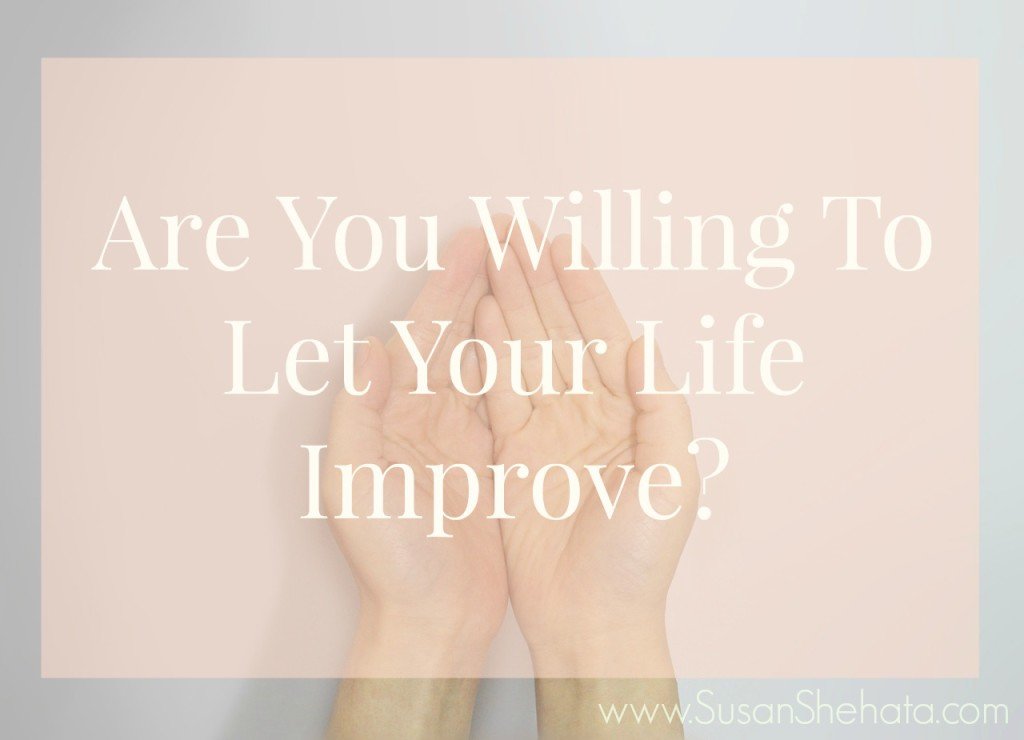 This is my motto lately, as I scour my house (and I mean, SCOUR) for anything that is just sitting around and taking up space.

The motto also appears to be permeating all areas of my life, as I am getting clearer on how to continue to refine my choices, to better support my goals.

I guess this motto has been with me for most of my life. It’s just that sometimes the process of letting go has been done willingly, and sometimes it has been accompanied by a bit of *ahem* resistance.

So, the biggest difference, lately, has been that I am actively looking at my life and choosing to let several things exit.

The purpose of this mass exodus is to make room for an expansion that has been actively underway for some time.

Since I prefer a life of simplicity, I don’t like to have too much clutter—physical, emotional or logistic clutter. I have learned this through trial and error. So, in order to allow room for expansion, it means that I must be willing to let go of other things—otherwise my life just feels crowded and chaotic.

Sometimes, you just have to negotiate the chaos.

At a certain point, you can choose to eliminate chaos from your life.

To be clear, that doesn’t mean that chaotic things stop happening. It just means that you no longer perceive them as chaotic, because you have shifted your relationship and attachment to them.

Just today, in fact, my day was feeling chaotic, until I released an attachment I had to a personal deadline.

Basically, you just have to let go of anything that is not supporting you.

You know, in theory, that clutter keeps you stuck.

But, we keep the things, thoughts and behaviors that may no longer be in alignment, because we are attached to them. And from my experience, that attachment is based on our perceived identity.

But, who will I be if I let go of that thought or expectation?

Who will I be if I am no longer married to that person?

Who will I be if I am no longer in that career?

And then the stuff…oh, the STUFF!!

The stuff represents all of the little aspects of our identity–Years of accumulating objects that, at one time, represented something about our self: something we wanted to do, wear, read, or be. We fear that if we let that object go, we may lose that part of our self, as well. And that is some scary shit, right there–losing who we are.

But, it is an illusion, my friends.

Your true identity is not your title, your relationship status or your possessions (or even a particular thought or expectation you have about yourself). These are things you have chosen to represent your identity. But, you will not stop being you, when these things change or go away.

In fact, when you allow these outer fixings to transform–when you release parts of your perceived identity by letting go of emotional and physical clutter–you actually become more of who you are, instead of staying fixed in the “you” that you thought you were at some point, or the “you” that everyone else has gotten comfortable with you being.

In order to break free from the bonds of being a limited being, you have to be willing to let go.

Staying attached to things remaining as they currently are, can limit you from a better possibility around the corner. (And many of us are attached to the status quo, even when things suck, because the sucky known is more comfortable than the unsucky unknown).

I spent most of my life assuming that what was around the corner would be worse than whatever experience I was currently having.

And let me tell you, that is a great way to stay stuck.

So, the first thing I had to let go of was that belief. And I’ll be honest, it’s taken at least a decade for me to reinforce the new belief that things “may actually improve” and it’s still fragile some days.

But that shift in belief has made it safe for me to continue to let go of other things in my life; things that I am very attached to, but I also recognize are keeping me stuck.

So, each day, I practice the motto that “I am now ready to let go of this”, in a new way.

And sometimes they are equally difficult.

And sometimes it is all easy…