Why Tell Your Story? 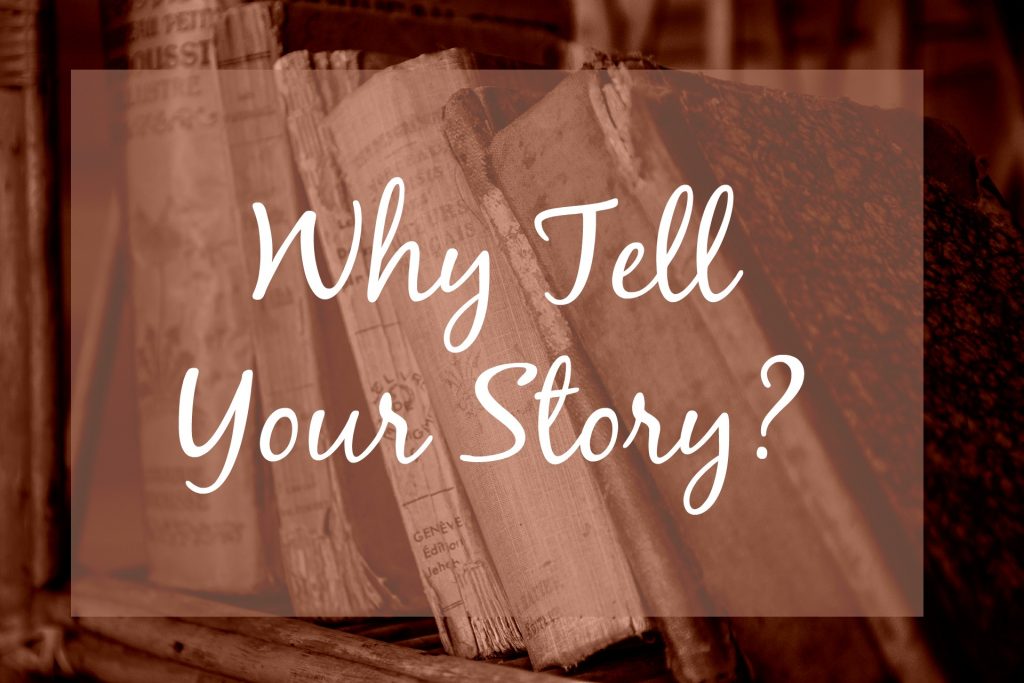 I’m what’s called a late adopter—someone who is very slow (umm…resistant) to new trends and developments.

I had a cell phone that was billed by the minute, and roughly the size of a newborn baby, way longer than necessary.

But, at least there is one area in life where I am an early adopter: having conversations about trauma.

I have been talking about trauma before it was trendy. And now, I am glad that the discussion is finally happening on a broader scale.

I work with limiting beliefs. I didn’t set out to specialize in trauma. But, when I started listening to people’s stories, it became clear that beneath most limiting beliefs, are traumatic imprints.

Traumas don’t have to be big to affect us.

Most traumas, like anything else, live on a spectrum.

So, why acknowledge trauma at all? Why not leave well enough alone?

The biggest reason, that I have witnessed, is that there is often a disconnection between what someone has experienced and how the imprint of that experience is CURRENTLY impacting their life. Once they see the connection, there is more potential for a healthy shift.

So, from my perspective, it is not about rehashing the past, holding on to an old story or staying stuck in victimhood—although there is the potential for any, and all, of that to happen.

One of the original definitions of the word victim is a person who is hurt, tortured, or killed by another. There is no shame in that, as far as I am concerned. Being victimized is an act that happens to a person. It’s not an indication of a person’s character.

Additionally, there is victim consciousness, which is when we continue to feel like a victim, long after the victimization has occurred. This can limit our ability to move into well-being. I work with people to release staying inside of victim consciousness.

When I work with people who are in victim consciousness, there is no judgment. I think of it more like a stop on a train route. So, we focus on where the individual seeks to go, as their chosen destination, and acknowledge how their current stop is affecting them. Ultimately, the stops along the way are just part of the trip.

Now, let’s talk about the perpetrator.

The etymology of the word perpetrator is “the one who did it.”  Etymology is beneficial, as it helps us understand these words before they became loaded with sociological baggage.

With that understanding of the word, it’s likely that we have all perpetrated hurtful acts—against ourselves, at the very least. Again, these acts are on a spectrum.

I also work with people to move out of perpetrator consciousness, as that is a place where we can get stuck, as well. People who get stuck here are sometimes those who were victimized, themselves, and move into this consciousness as a survival strategy, or coping mechanism.

Victim consciousness and perpetrator consciousness are a lock and key system. They are interdependent. So, it’s effective to address both, and dissolve them simultaneously, if possible.

I see these two states of consciousness as a figure eight that we all skate within. Meaning that most of us have a little, or a lot, of both states.

These states of consciousness began to express very early in our life. The behaviors formed, or were reinforced, by our family of origin, who were also just acting out their own cycles. Perhaps we went on to internalize these behaviors—self-punishing, and feeling victimized by our own thoughts. Then, it got so overwhelming inside ourselves, that we began to express it outwardly toward others, as well.

I witness that people either fluctuate between both sides of the figure eight loop—victim or perpetrator—or stay on the side that feels safest and most comfortable.

That is, until we step out of the cycle all together.

Wait? Is that possible??

It is. But, it can take effort. One of the steps involves releasing judgment and blame, of ourselves and others. No prob, right?

When we experience states of judgment, it is so uncomfortable, that we express that energy, in some way. It gets released on either our self, or on others, or both, as both judgment and blame. This act contributes to us staying stuck in the cycle of victim/perpetrator consciousness.

There are no easy solutions for releasing judgment and blame. But, when you identify your target destination, it can be a lot easier to find a route.

For me, the destination has been to step out of the cycle. And ever since I began heading in that direction, I have seen much more peace in my life.

That is why I help others do the same.

To be clear, stepping “out of the cycle” doesn’t completely stop external events from happening. Primarily, it shifts our relationship to, and participation in, those events.

Most of what prevents us from discussing trauma is shame. And shame enables both victim and perpetrator consciousness.

When we share our stories with people who hold a safe container, we can dissolve the shame. And, perhaps even more powerfully, when we, as a community, can witness, acknowledge and learn from one another’s stories, transformation happens. It leads to a shift in collective consciousness.

There are many of us who are here to help…long after it stops trending on social media.

Through this process, will we eliminate all hurt from this planet? Probably not. But, wouldn’t it be nice to at least make a dent?

If we are to genuinely escort ourselves, and each other, out of victim and perpetrator consciousness, I feel we must listen to, and acknowledge, one another. Remember, for many people speaking up now, they are telling their stories for the very first time.

And we are all just people, having human experiences…so, let’s walk gently with one another, if possible.

I believe that, ultimately, it is up to each individual to decide to “feel heard.” But, feeling heard is a lot easier when people are actually listening.